Introduced in Zwift’s December 2020 update, Two Bridges Loop is the first route to use the new KOM Bypass – a short stretch of road which connects the Hilly KOM forward with the Hilly KOM reverse approximately halfway up each climb, effectively shortcutting both KOM segments.

This route is simply an abbreviated version of the event-only Hilly Route Reverse, since we remove 2.1km of road and 20m of elevation gain by taking the KOM bypass.

We begin in downtown Watopia, traveling toward the Volcano. After a short ramp-up we’re in the Esses, twisting and rolling our way to a descent which drops us into the reverse sprint over the JWB bridge.

Recover a bit post-sprint as you hit the cobbles of the Italian Villas, then bump up those watts on the uphill rollers past the waterfall. Cross the 360 bridge and pass Hank’s gas station before we start the KOM reverse climb past the giant statues. This is the most significant climb of the route.

We won’t be finishing the official KOM reverse, though – only taking on the steepest part before we hang a left onto the new KOM bypass. This short (~200 meters) bit of road connects the midpoint of the reverse KOM with the midpoint of the forward KOM. It’s slightly downhill in this direction, which means we’ll get spit out quickly onto the downhill of the forward KOM. Be ready to go fast!

Keep that momentum high and you’ll find yourself back in downtown Watopia before you realize it. Time to sprint for the line… or take on another lap? 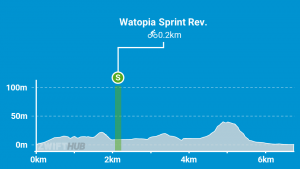